Finally, some more photos from our Japan trip a month ago.

We took one day in Kyoto to do a day-trip to Hiroshima. It’s a bit of a ride, but a couple hours on the shinkansen (bullet train) is no big deal. 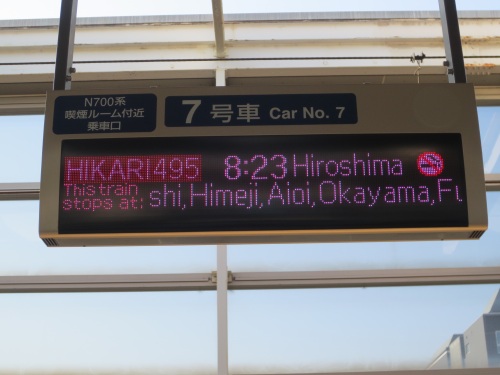 Hiroshima means pretty much one thing to most Americans, but it’s also a really cool city in its own right. They have an awesome public transportation system of trams that they call a “Working Museum.” Its fleet is composed of trains of all kinds manufactured in Europe and Asia during the past half century. So you’ll be on a relatively modern, 1980s train, chugging down the street, and see a ca. 1950 train waiting at the intersection. END_OF_DOCUMENT_TOKEN_TO_BE_REPLACED

Here’s a little movie I made about our trip to Japan. Consider it a follow-up to the previous batches of photos (Tokyo, Mt. Fuji), and a preview for some yet-to-come (Kyoto, Hiroshima, Miyajima).

I recommend clicking on the word “Vimeo” in the video box, as that will open up a new page with a larger viewing window.