Care to guess what this is? 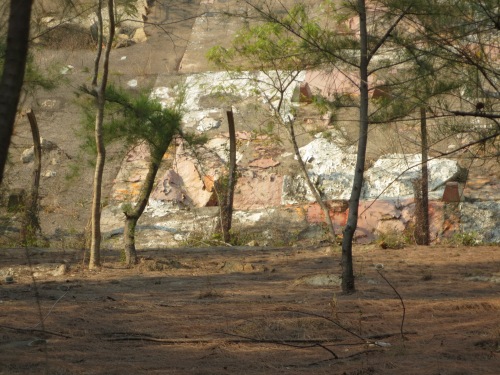 That’s old, peeling paint. It’s much faded now, but it used to be bright orange and white. END_OF_DOCUMENT_TOKEN_TO_BE_REPLACED 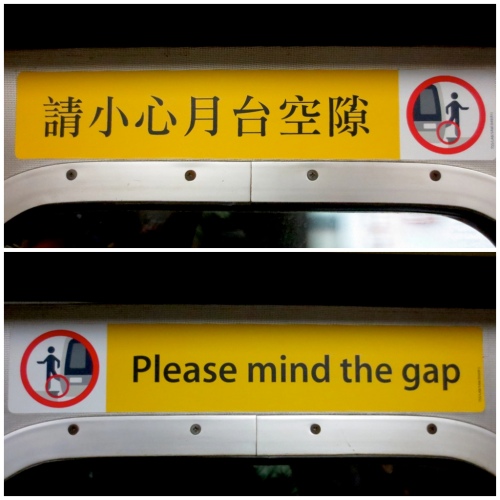 We are nearing the end of the line on my MTR ramblings. (Perhaps you missed Part 1 or Part 2?)

Hong Kong, like much of Asia, is very much into cutesy-pie cartoonish images (Hello Kitty, e.g.), so I’m surprised that the Octopus card has a boring multicolored lemniscate instead of a big-eyed cartoon octopus.

The MTR is super easy to ride. For one thing, you use the Octopus card (akin to London’s Oyster Card). It’s a touch-and-go stored value card, which means you can leave it in your wallet and just touch your wallet to the turnstile as you enter and leave. You can also use your Octopus card on things like the Star Ferry, the Peak Tram, and at all kinds of stores (like 7-11). I use my OctoCard (no one calls it that, not even me) to pay my entrance fee at the CityU gym, and you can use it to pay overdue fines at the library. It is, in a word, awesomegreat.

You can use your Octopus card to buy a nice lemon tea or a newspaper. Or both. Genius.
(Images via Wikimedia and Calvin C.)

Funny side story about getting our Octopus cards. Right after breakfast on our first full day here, we went down into the Kowloon Tong station to get our cards. We go up to the kiosk with HK$300 in cash (a new card has $100 of credit on it, plus a $50 deposit), and Cate slides over the $300 and says “Two Octopus cards, please.” And the station attendant says “One-hundred fifty.” And Cate says “Yes, but I’d like two, please.” He says “One at a time.” So Cate looks at me askance and slides him $200. He gives her an Octopus card and $50 change. She hands me the Octopus card, then slides the $50 back to him along with our third $100 bill. He calmly takes it without a word and hands her another Octopus card. We still don’t know why he couldn’t hand us two cards at once.

MTR stations are clean, well-lit, and well-signed. They’re also very safe—none of the not-after-dark sketchiness of some (or all) of the stations in other systems of the world. Here’s Central.

As seen on a Saturday morning. It’s rarely this empty.

If you can read a map, you can ride the MTR. And inside almost all of the trains are these handy lighted signs that show which station you’re at, which is next, and at transfer (British English “interchange”) stations also flash the lights of the line you can change to. Plus everything is announced over clear and functioning speakers (hear that, CTA?) in Cantonese, Mandarin, and English. This offers an excellent way to learn how to pronounce some Cantonese.

Departing Admiralty, the sign shows the direction we’re heading, as well as lighting up all of the future stops. This map, incidentally, is a miracle of design. It renders most (not all) of a large, sprawling network into one long rectangle that is still intelligible. Our home station, Kowloon Tong, is at the upper right corner.

The MTR was also cleverly designed with cross-platform transfers. What this means is that a given platform does not necessarily offer access to the same line in different directions, but it does mean that you can transfer lines without having to go up or down stairs.

Look at that map. If you’re traveling on the red (Tsuen Wan) line from Admiralty and want to go to Kowloon Tong (on the green Kwun Tong line), you can transfer at Mong Kok by simply walking across the platform—that is, on that platform, both the red and green line trains are headed north. Same goes for traveling in the opposite direction—you change from the green to the red at Mong Kok, because both trains at that platform are traveling south. So at Mong Kok, the green/red interchange platforms are stacked up vertically, with the northbound trains together and the southbound trains together.

But, if you want to go from, say, Kowloon Tong (green line) to Sham Shui Po (red line) to buy some cut-rate printer toner, you transfer at Prince Edward, not just because it’s closer but because the trains are stacked differently. Here, the southbound green line train and the northbound red line train are on the same platform, and vice versa on the other platform. So this means that somewhere between Prince Edward and Mong Kok, there’s a switcheroo. Fascinating.

The MTR is a private corporation. (Prior to 2001, the MTR was wholly owned by the Hong Kong government.) It’s listed on the Hang Seng  Index (MTRC), so buy some shares if you want to. It’s one of the few profitable public transit systems in the world not only from the money that fares brings in, but also because it is heavily involved in land development. The MTR develops lands near its stations into housing estates and shopping malls, which it can then (of course) advertise in the MTR to the millions of people who ride it each day.

The stations themselves are also prime real estate. Every MTR station has shops in it, and we’re not talking just newsstands (though there are those too). We’re talking high-end stuff: food, clothing, cosmetics, banking, etc.

Here are a few in Central: 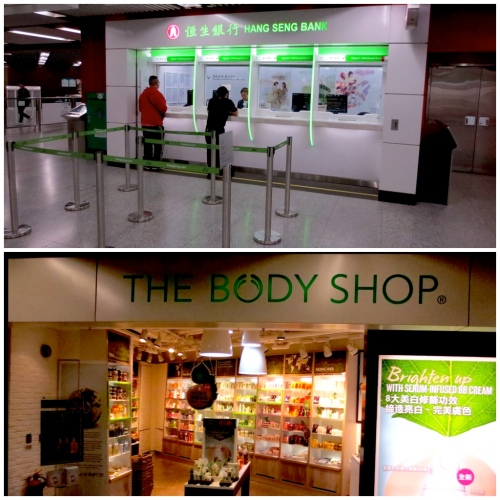 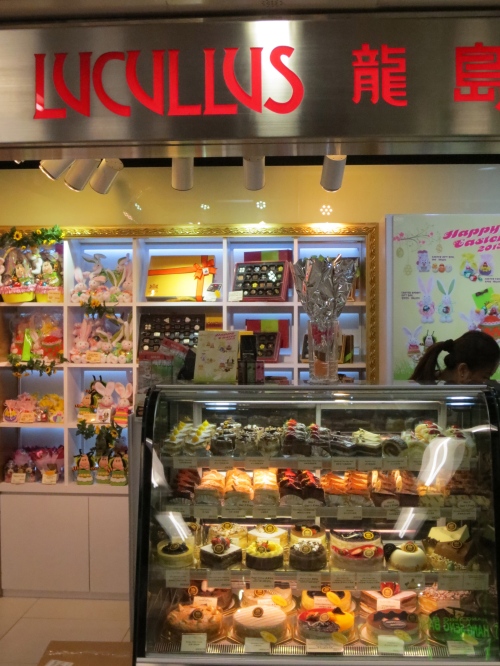 Next up: it’s so inexpensive! Also, an old-timey documentary! 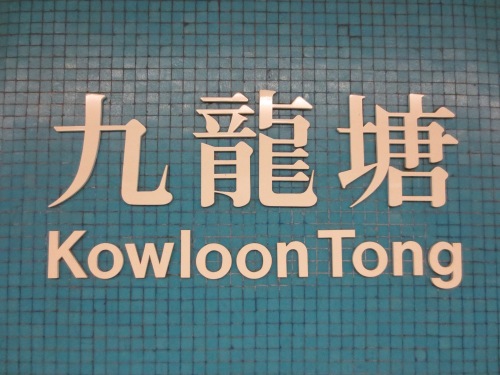 Did you enjoy Part 1? Would you like to hear more about the MTR?

Well, it gets excellent cell phone service, even way, way underground, so a lot of people spend their time watching streaming movies. Behold: 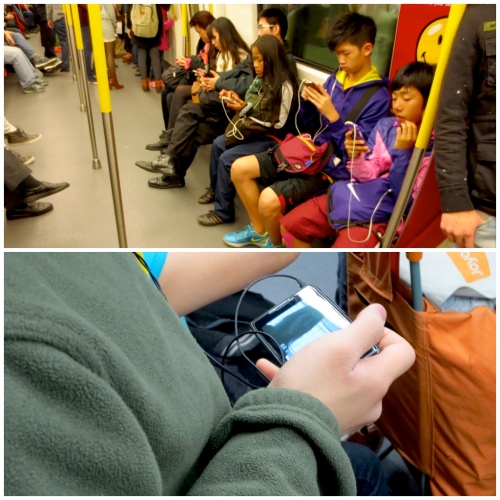 They also play games on their phones, games that are so engrossing that they continue playing them with unbroken concentration even when, say, walking through the station like they own the place and thus don’t need to pay any attention to anyone else. Ahem. END_OF_DOCUMENT_TOKEN_TO_BE_REPLACED

It is time to talk about the MTR.

END_OF_DOCUMENT_TOKEN_TO_BE_REPLACED

We live really close to Bruce Lee’s last house, at 41 Cumberland Road here in our Kowloon Tong neighborhood. He bought the mansion in July 1972, on the heels of the massive success of The Big Boss and Fist of Fury. (You have to have a lot of money to buy a gated mansion in Kowloon Tong, then as now.) He lived there until his death at age in 32 in 1973. So yeah, only about a year. But still, it’s Bruce Lee’s house.

Here’s how it looked back in the day. 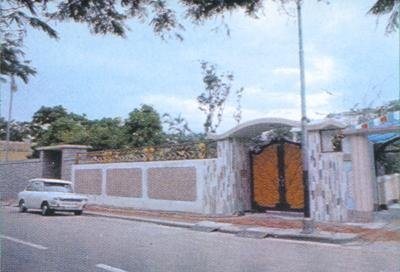 Here’s an awesome photo of the courtyard, with Brandon Lee riding his bike.

So of course we wandered on over (really, it’s 10 minutes from our place) to see what it looks like today.

It is now, if you can believe it, one of the love hotels here in Kowloon Tong. How can you tell? If you look on the left side, in front of the building, there’s a car parked in a car port, with a curtain hanging to the right. Discreet visitors can pull the curtain in front of their vehicle so that no one will see who’s parked there. Nice.

So yeah, it’s a little less impressive, but still a cool piece of film, and Hong Kong, history. 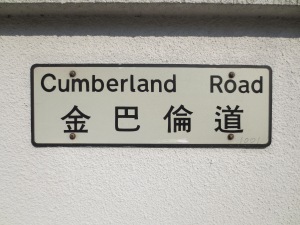 This property has been the subject of an ongoing kerfuffle, wherein the philanthropist owner Yu Panglin was trying to sell or donate it to the HK government to turn into a Bruce Lee museum, but the HK government demurred. It seems there might have been an attempt by Yu to extort some very desirable, and very expensive, land swap deal as a condition for the donation, though Yu says his real conditions of donation were that the government would have to add three floors to the mansion to include a cinema, a library, and a martial arts training center.

But that didn’t happen. So now it’s for sale. Read all about it in the South China Morning Post.

I leave you with this video. Note that the tour guide is wrong when he says it’s currently a “brothel”; it’s really just a pay-by-the-hour motel. And there’s no longer any plan to make it into a museum. But, there are some nice before-and-after images here and also a better view of the car-obscuring curtains.

Chinese New Year—or the Spring Festival (春節), as it’s sometimes called—just ended here, and we had a great time taking in some of the sights and sounds. It’s a big deal here (obviously), and quite different from Solar New Year in the US: more days, more family, more decorations, less booze. The celebration of the lunar New Year is a bit different in different parts of Asia. Here in Hong Kong it’s “only” four days.

Of course there are decorations. Here’s the entrance foyer of our building. END_OF_DOCUMENT_TOKEN_TO_BE_REPLACED