We live really close to Bruce Lee’s last house, at 41 Cumberland Road here in our Kowloon Tong neighborhood. He bought the mansion in July 1972, on the heels of the massive success of The Big Boss and Fist of Fury. (You have to have a lot of money to buy a gated mansion in Kowloon Tong, then as now.) He lived there until his death at age in 32 in 1973. So yeah, only about a year. But still, it’s Bruce Lee’s house.

Here’s how it looked back in the day.

Here’s an awesome photo of the courtyard, with Brandon Lee riding his bike.

So of course we wandered on over (really, it’s 10 minutes from our place) to see what it looks like today. 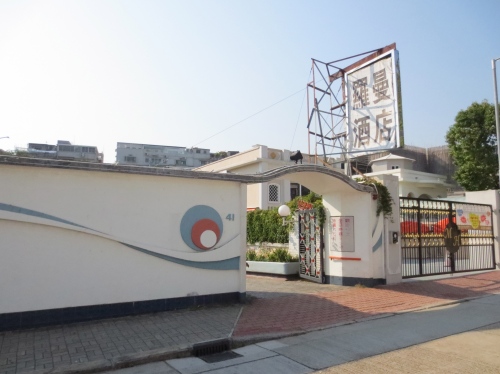 It is now, if you can believe it, one of the love hotels here in Kowloon Tong. How can you tell? If you look on the left side, in front of the building, there’s a car parked in a car port, with a curtain hanging to the right. Discreet visitors can pull the curtain in front of their vehicle so that no one will see who’s parked there. Nice.

So yeah, it’s a little less impressive, but still a cool piece of film, and Hong Kong, history.

This property has been the subject of an ongoing kerfuffle, wherein the philanthropist owner Yu Panglin was trying to sell or donate it to the HK government to turn into a Bruce Lee museum, but the HK government demurred. It seems there might have been an attempt by Yu to extort some very desirable, and very expensive, land swap deal as a condition for the donation, though Yu says his real conditions of donation were that the government would have to add three floors to the mansion to include a cinema, a library, and a martial arts training center.

But that didn’t happen. So now it’s for sale. Read all about it in the South China Morning Post.

I leave you with this video. Note that the tour guide is wrong when he says it’s currently a “brothel”; it’s really just a pay-by-the-hour motel. And there’s no longer any plan to make it into a museum. But, there are some nice before-and-after images here and also a better view of the car-obscuring curtains.