Did you enjoy Part 1? Would you like to hear more about the MTR?

Well, it gets excellent cell phone service, even way, way underground, so a lot of people spend their time watching streaming movies. Behold:

They also play games on their phones, games that are so engrossing that they continue playing them with unbroken concentration even when, say, walking through the station like they own the place and thus don’t need to pay any attention to anyone else. Ahem.

One time, while riding the East Rail Line, I boarded the quiet car. The icon painted on the platform looked promising, as I don’t always need to hear phone conversations, Cantopop, and video game sounds. 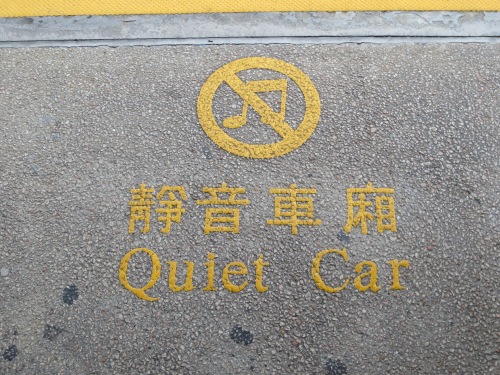 Here’s what I heard a lot of on that trip: phone conversations, Cantopop, and video game sounds. Why is that? Because the only thing quiet about the so-called Quiet Car is that there’s no sound coming from the monitors that show news clips and advertisements. (And those aren’t even that loud to begin with.) Everything else carries on as before, with no noticeable change in volume. Such is life in the big city.

The stations of the MTR are also considerably larger than any US station I’ve been through, and the complexity of HK’s topography (on which more later) means that if you don’t go out the right exit, you not only won’t be able to get where you’re going, you probably also won’t really know where you are.

Here, for example, is the list of exits at the Tsim Sha Tsui/East Tsim Sha Tsui station (admittedly, one of the more complex ones).

Here’s where those are on a map:

So imagine that you meant to exit at A1 and ended up at P1 by mistake. That would be rough.

Similarly, the two most distant exits at the Central stop are 700m apart. That’s almost half a mile.

The MTR is also quite lovely. It has a great, simple, distinctive logo, meant to represent a rail line connecting HK Island with Kowloon. (In fact, contrary to what you might guess, the first piece of the MTR that was built was not the Island Line—which stretches along the northern coast of HK Island—but instead extended from northern Kowloon to HK Island. I don’t know this for sure, but I’m guessing it’s because there was/is already a tram system in place that pretty much replicates the Island Line route, albeit at a much slower pace.)

So it’s easy to spot MTR stations no matter where you are.

Entrance to Shek Kip Mei station, with the Kowloon hills in the background and housing estates flanking.

Next up in the MTR: Octopuses! Easy riders! Interchange stations! Profits! 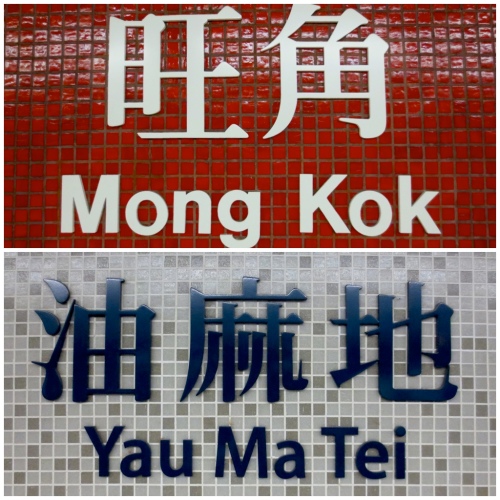