Final batch of pictures from our Japan trip, these from Kyoto, the cultural capital of Japan.

On our first day, we went off to Kiyomizu-dera, a temple first built in the late eighth century but whose present buildings date from the seventeenth. On the way, we encountered a hillside full of bedecked Buddhas. 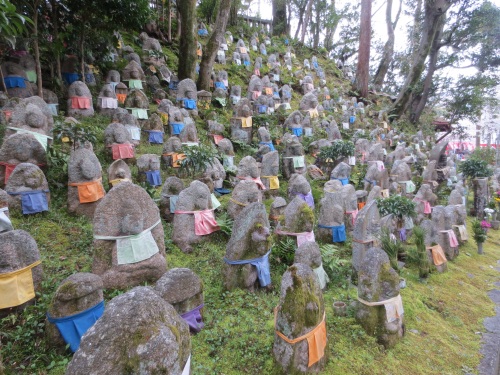 Before the actual temple precincts, we went into the Tainai-meguri, by which one symbolically enters a boddhisatva’s womb. What this means in reality is that you put your shoes in a plastic bag, then descend a stone staircase into a narrow, low-ceilinged passageway that is completely black. There’s a worn-smooth railing on the left, which you are instructed to hold at all times, as it’s the only way to figure out which way you’re going. And since the passage makes several 90-degree turns, if you let go of the railing you will almost certainly walk face-first into a stone wall.

I didn’t get a photo of the entrance, but someone else did.

The staircase down is in the center. Photo by Elliott Kallen.

It was a bit unnerving, but also genuinely womb-like (I guess). It feels like you are really, really deep underground, but of course you’re not. After a minute or two, you emerge into a small chamber with a dim light shining on a prayer wheel, which you can spin before heading up the stairs back into the light. Pretty awesome!

And here’s the temple itself, along with the requisite cherry blossoms. The day was rather overcast and so the colors got washed out a bit, but even still it’s all stunning. 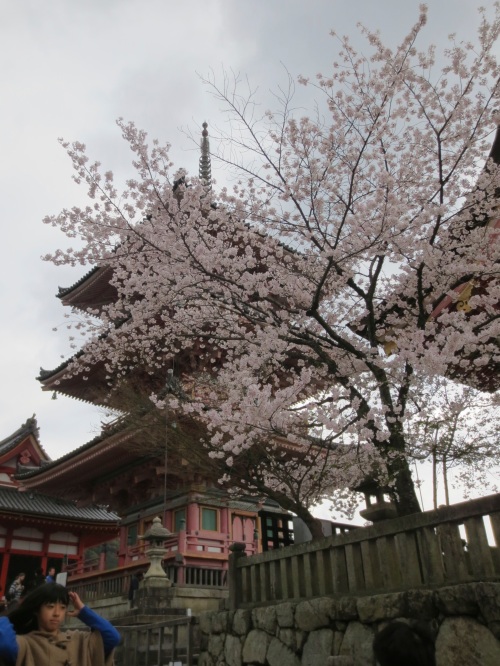 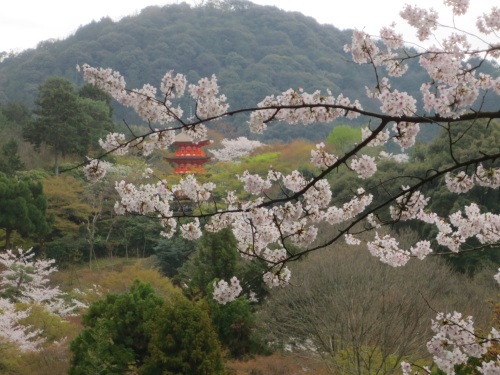 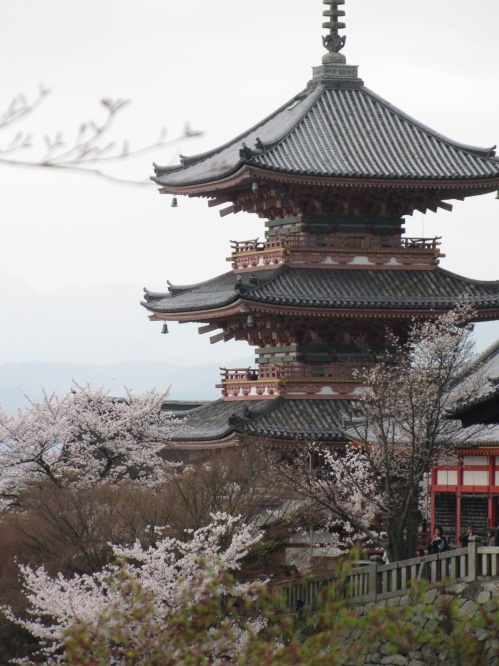 There was evidently some kind of ceremony going on while we were there. 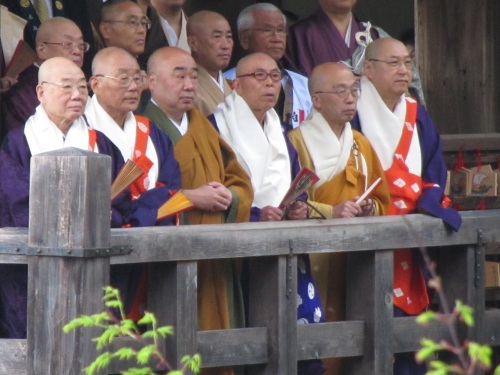 I’m not sure what they’re looking at, but it seems pretty compelling.

There were lots of Japanese there taking advantage of the various fortune-telling options and good-luck rituals. 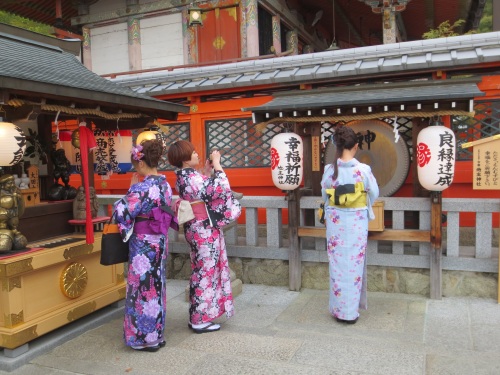 We then walked down a couple of charming old streets (Sannen-zaka and Ninen-zaka) crowded with old wooden houses, shops, and people. We also encountered a trio of maiko (apprentice geishas). Cate thinks they were there for the tourists, but I insist, based on wishing-makes-it-so, that they were authentic. (I’m just saying, they weren’t selling anything, or even posing for pictures with anyone, apart from one imperious guy who clearly embarrassed the hell out of them [N.B.: I wasn’t that guy].) 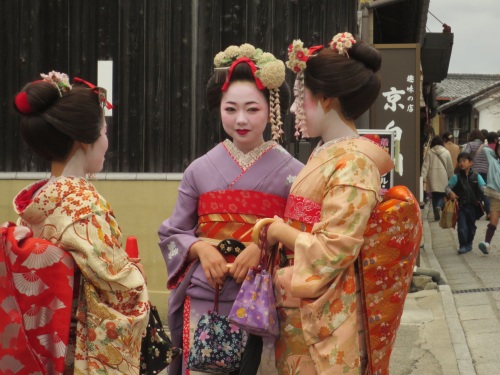 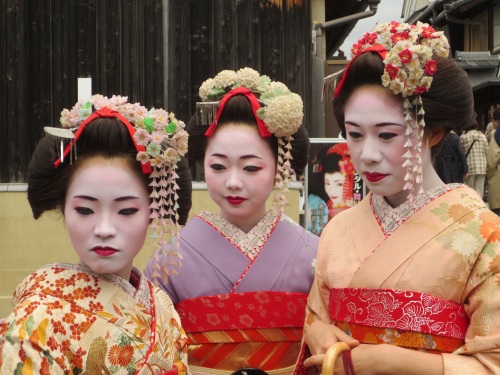 And now a brief interlude of atmospheric images. 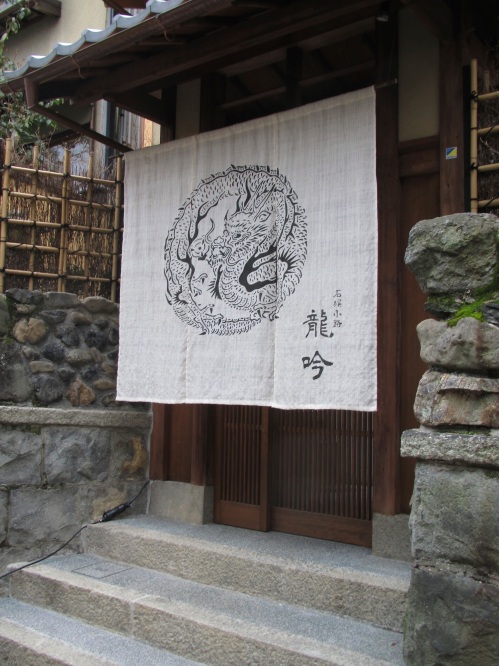 Noren are traditional Japanese fabric dividers. They hang in most doorways, especially restaurants (even in, say, the train stations) and traditional shops. 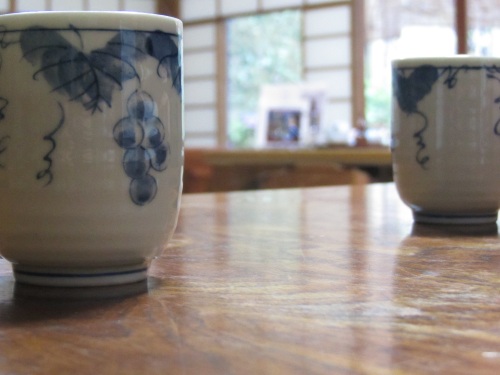 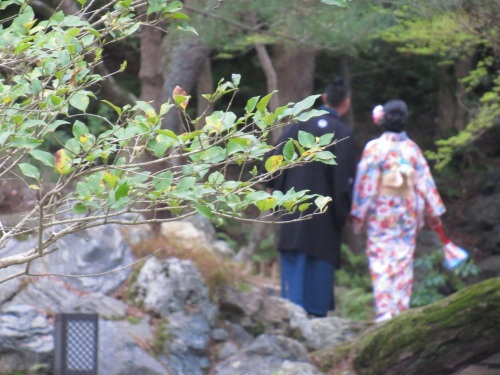 A stroll in the park.

And some photos of the cherry blossoms. 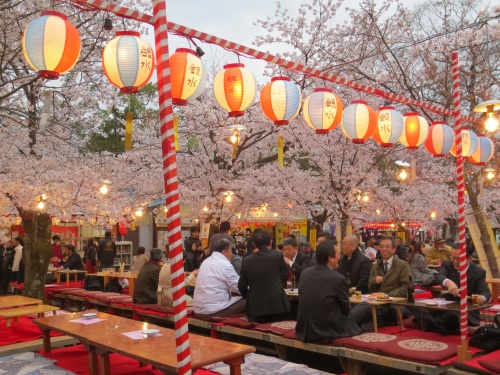 The post-work drinking-and-carousing beneath the cherry blossoms is a bit more fancy in Kyoto: more tables than tarps. 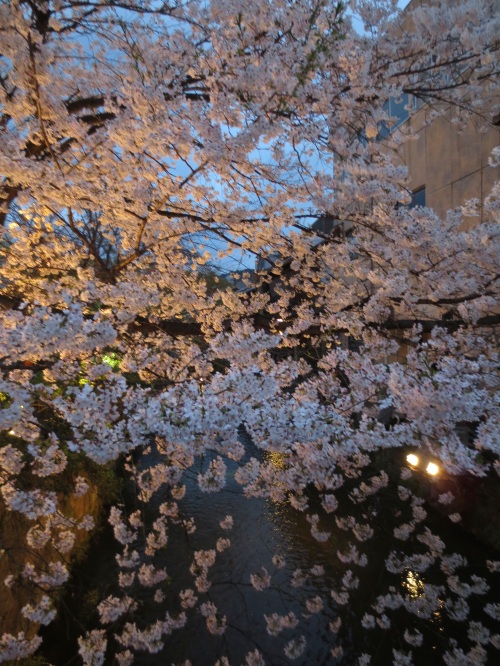 Cherry trees in Shimbashi, which, according to Lonely Planet, is “arguably, the most beautiful street in all of Asia, especially in the evening and during cherry-blossom season.”

Nishiki Market was an unexpectedly cool place: lots of food, crafts, and other fun stuff all under this awesome Lite-Brite roof. 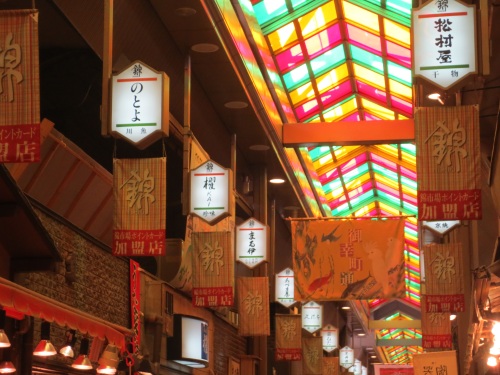 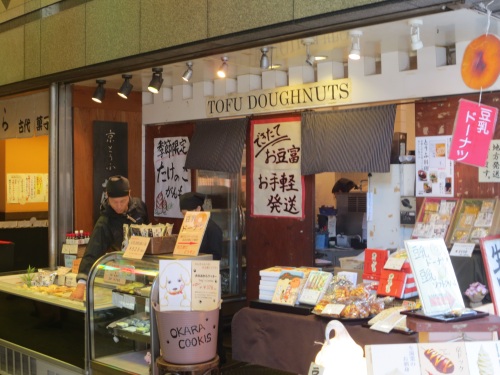 I’m sorry to say, I did not try one. It might as well have said ‘sushi waffles.’ 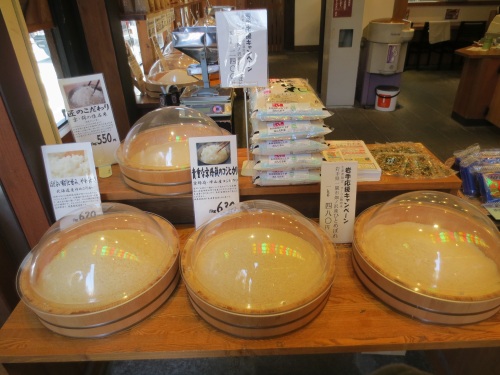 Walking into a rice store in Japan is like walking into a wine store. Unless you know quite a bit about the product, you just look for something with a nice label. 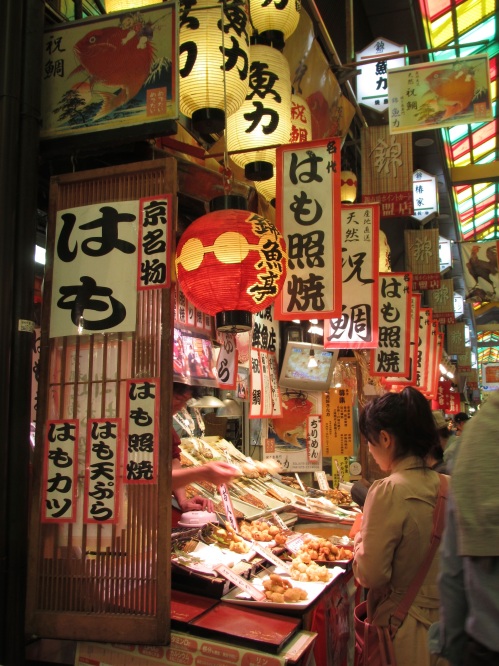 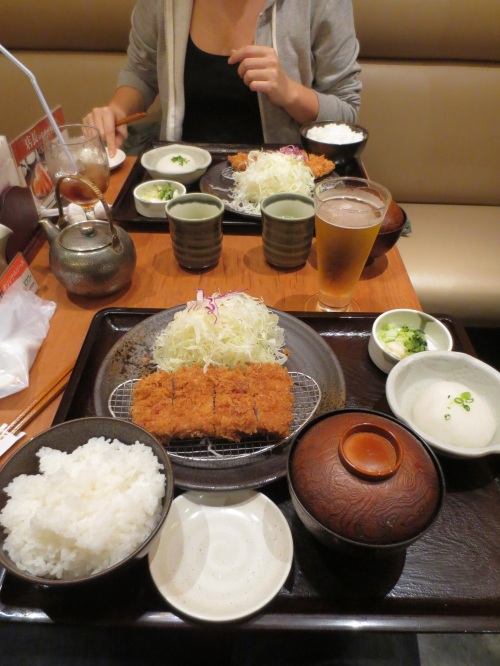 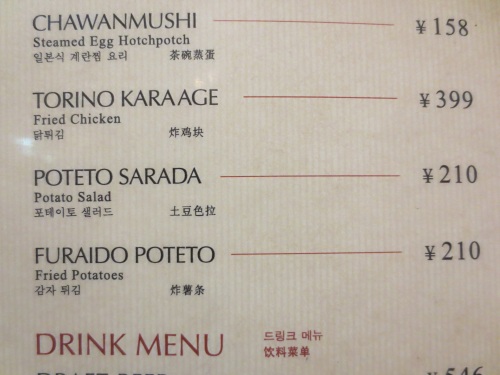 From now on, of course, we will only ever call potato salad “poteto sarada.” 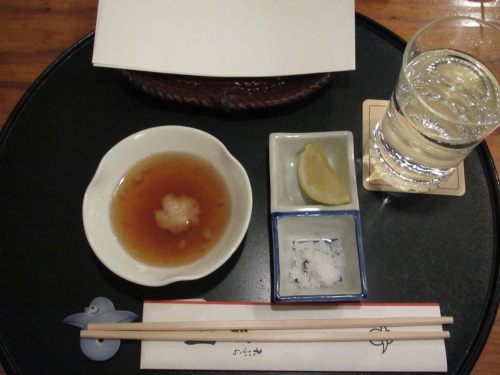 The place setting at the tempura restaurant we went to, which seated no more than ten people. 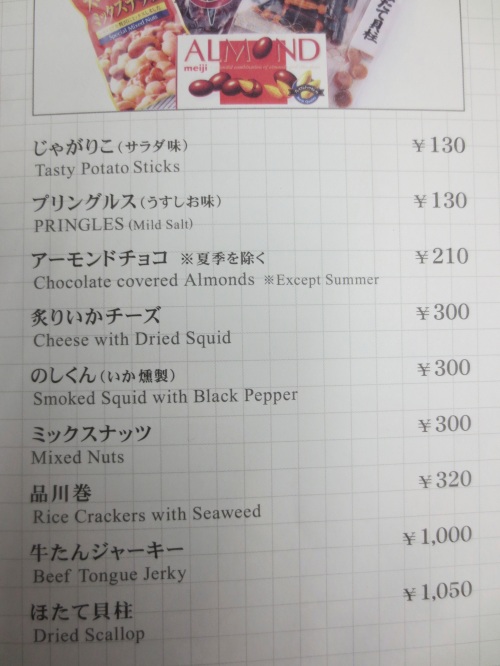 The snack menu on the express train from Tokyo to Narita Airport. Starts out familiar, then takes a sharp turn into “Whhah?” with item number four. 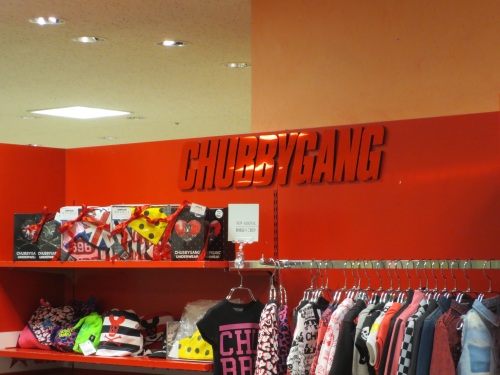 There are so many reasons I won’t be shopping in this area. 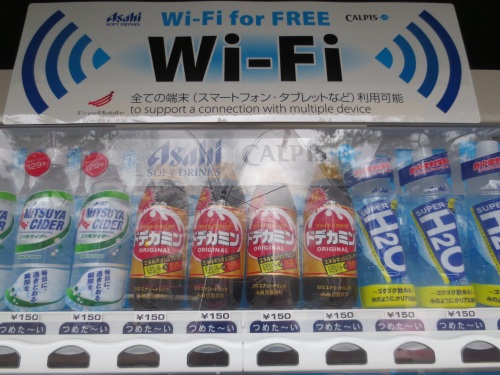 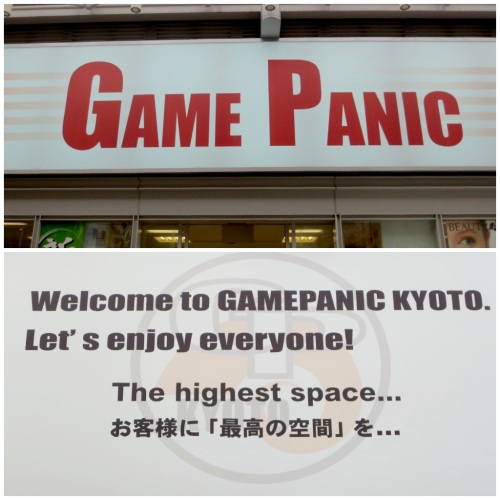 Inside, surprisingly, everyone was quite calm.

I will close with another peaceful image, preceded by the warning we encountered nearby. I just love the “and so on” at the end. It’s like the ultimate legal disclaimer. “Look, we covered that clearly in the contract! See Section 1.4, which clearly states ‘in case and so on’.” 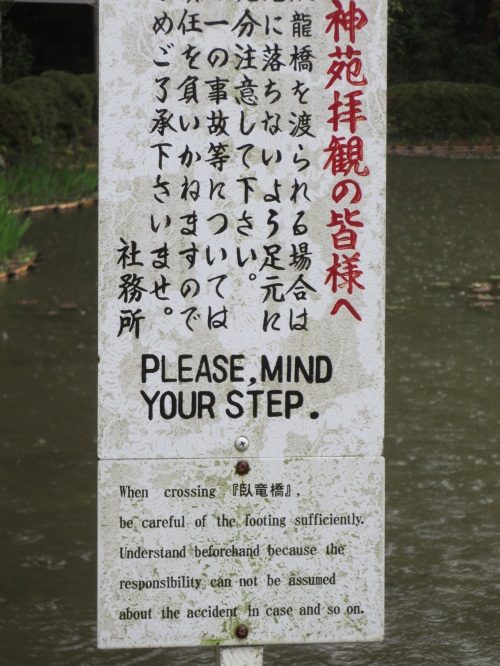 You know that awesome scene in Lost in Translation when ScarJo goes to Kyoto and witnesses a bunch of events and images that clearly illustrate for us, the viewers, just how alienating is the life she is temporarily leading in Japan while waiting for her ambitious-but-clueless photographer husband to stop flirting with vapid celebrities?

You know, where she walks from stone to stone at a temple? Here are the actual stones. Whoa. 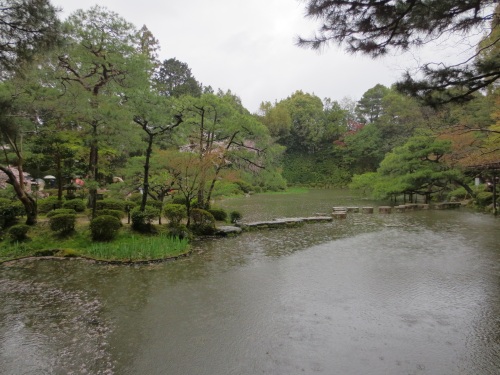