A couple of weekends ago we had the unique opportunity to attend the City University Banquet. This is an annual event put on by the Student Union, largely as a fundraiser but also in large part as a hell-raiser. (Hey now!) One of the open spaces, normally a rather staid taxi drop-off point near the gym and the main administration building, gets transformed into a giant sea of tables, with a stage at one end and massive sound and lighting gear all over. Here’s an overview:

On most days, this space is basically empty. 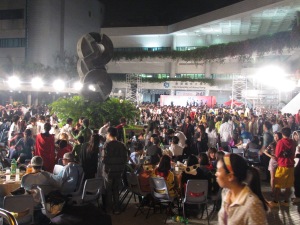 Tickets to attend aren’t super expensive, but they aren’t super cheap either. My office purchased an entire table, so we were there with a bunch of colleagues.

The ticket said that the event started at 6:30, so we dutifully (and, in retrospect, foolishly) showed up at 6:29. There was no one there. We sat around for a while, and other people started filtering in around 7:00, which was the time that the official schedule sitting on the table said was the time the opening ceremony would begin.

Evidently it’s a tradition for the various student groups to show up in matching costumes, which (as far as we could determine) don’t have anything to do with their particular club or organization. So, for example, you got yer Sesame Street characters:

Nothing creepy about this, no sir.

And you got yer Smurfs commingling with the aliens from Toy Story: 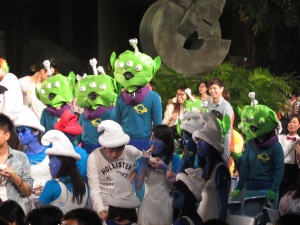 And of course you’ve got yer garden-variety bananas:

Just a bunch of students. Heh.

And a bunch of giraffes:

A group of giraffes is called a ‘tower,’ haven’t you herd?

And, um, some guys painted yellow:

Students can be so clique-y.

And, obviously, a bunch of drink boxes:

Not sure if they’ve got an endorsement deal with VitaSoy, but they should. Also not sure who that is on the right.

And a lot of students dressed in drag:

There were a few performances  over the course of the evening. Every HK university, as far as I can tell, has a hip-hop dance group. Here’s CityU’s in action:

But the main event was the chance for each student group—and there were many in attendance—to participate in the “Oh my banquet style” (i.e., Gangnam Style) dance competition. Each group had 1 min. to dance along to a song of their choice. Here’s the aseptic packaging doing their bit: 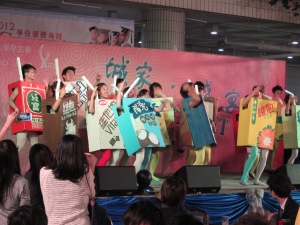 I don’t remember what song they danced to, but I can assure you it had little to do with the importance of choosing healthy beverages to stay hydrated.

The best parts of the evening, though, were when all of these inscrutable-to-the-uninitiated traditions come together in truly surreal fashion, as when the Teletubbies get the crowd going with this impassioned exchange: