Okay, here’s the last of the photos from our December trip to Cambodia. These are from Phnom Penh and environs.

Be forewarned: some of these are of the Tuol Sleng S-21 Genocide Museum and the Cheong Ek Killing Fields. Only one photo actually depicts anything graphic—and it’s a photo of a photo—but the most horrific acts one can imagine occurred here.

Just a routine occurrence: people pushing carts of what appear to be piles of salted shellfish.

We were told that there are traffic laws in Phnom Penh. I think there’s actually only one, though: do what you have to. Seriously, most intersections have no traffic lights, so light anarchy is the status quo.

Q: Who has the right of way here? A: Whoever asserts it most forcefully.

There’s much to admire in this photo. The SUV parked nonchalantly into the street, the disappearance of the sidewalk beneath a shoe “display,” etc. Walking around Phnom Penh is a bit of a challenge.

The view from the Foreign Correspondents’ Club, where foreign journalists gathered in the early months of the Khmer Rouge to try to figure out what was going on. 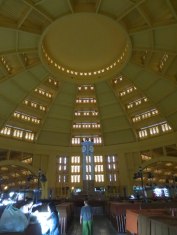 The Russian Market, at the other end of town. It is basically thousands of small stalls within a corrugated metal structure that lacks air conditioning. As our guidebook puckishly put it, “Shop till you drop (of heat exhaustion).” Hilarious! 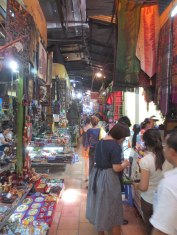 Seriously, you can buy almost anything here, like fabrics and souvenirs… 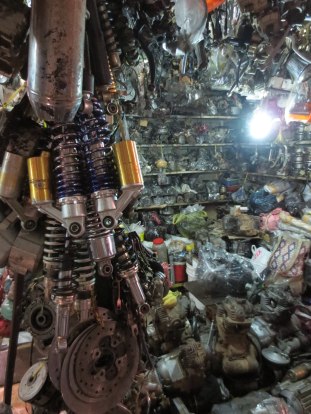 Or, ummm, motorbike parts… (pretty sure this stall was run by Jawas)

Or housewares. (Aside: this photo is completely untouched, and is of the 1500+ photos I took perhaps my most favorite).

Tuol Sleng, or S-21, is a former high school that was converted by the Khmer Rouge in 1975 to Security Prison 21. It is estimated that, from 1975-9, 20,000 people were imprisoned, tortured, and executed here. “Tuol Sleng” means “Strychnine Hill” in Khmer.

Tuol Sleng, Building B. One of the things that makes this place so stomach-turning is the juxtaposition of the horror of what occurred with the beauty of the place itself—it’s in a quiet, almost suburban, neighborhood, and has this beautiful courtyard.

The site has been left almost completely untouched. The barbed wire was put in place to keep prisoners from throwing themselves off the balconies.

The fact that S-21 was formerly a school is especially perverse. Here’s a surviving chalkboard, on which someone appears to have written rules for student conduct in French. (“Il est absolument interdit de faire du bruit.”) 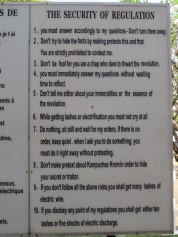 This sign has a translation of the S-21 rules that were posted there.

The institutional floor pattern typical of a 1960s era high school. Yes, we’re pretty sure those dark stains in the center of the room are blood stains.

Each of these interrogation rooms was outfitted like this.

Each room’s wall has a photo of how it was discovered by the liberating Vietnamese army. As they approached, the Khmer Rouge quickly killed the remaining prisoners before fleeing.

Each large classroom (like the one behind this wire) was converted into many smaller cells.

More cells, these in brick. You can see how quickly and sloppily they were constructed.

Many of the rooms of cells had these numbers on the walls, equal to the number of cells in the room. I’m not sure what they were for.

The Khmer Rouge took photos of every prisoner, but they got separated from their information folders and so the identities of many of these remain unknown.

Two Buddhist monks contemplating waterboarding equipment. That is a watering can on top. 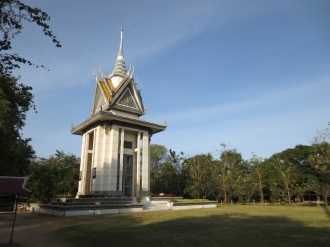 The memorial stupa at the Cheong Ek Killing Fields contains the remains of thousands of the bodies discovered there. Most of the victims came from S-21.

There are piles and piles of skulls (more than 5,000), representing only a fraction of the total number of bodies estimated to be buried there. 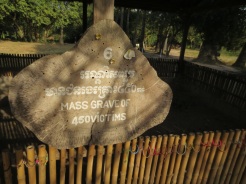 This is one of many marked mass graves. 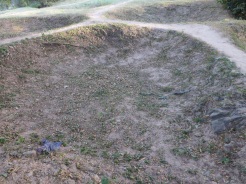 These are untouched mass graves—the depressions in the ground are the shallow graves that shift and sink. You can see bits of fabric, bone, and teeth, which appear after heavy rains. 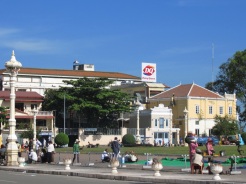 On another topic: seen from the entrance to the Royal Palace. 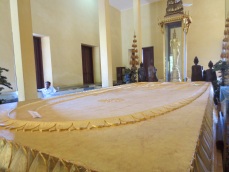 A giant footprint of Buddha.

An amazing collection of objects awaits inside the SIlver Pagoda (so named because the floor is literally covered with silver). Can’t take photos inside, alas. 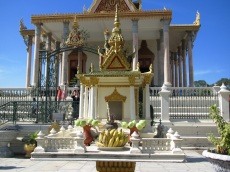 A spirit house near the Silver Pagoda. 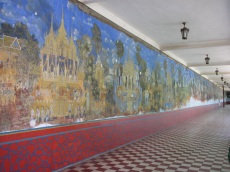 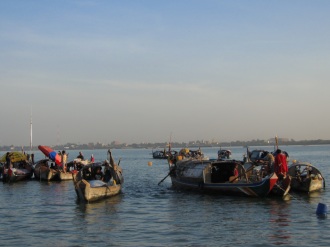 Phnom Penh sites at the confluence of three rivers: Tonlé Sap (which starts up near Siem Reap), Mekong and Bassac.

It was surprising to see a Christian symbol after so many weeks of Buddhist and Hindu art.

This is the Cambodia Navy detail assigned to protect the royal palace (which sits near the water across the river). It’s a bit of an ad hoc affair.

You would think more posh digs would be in order here.