Care to guess what this is?

That’s old, peeling paint. It’s much faded now, but it used to be bright orange and white.

It’s a huge checkerboard painted on the side of a mountain. Here’s a bigger view. 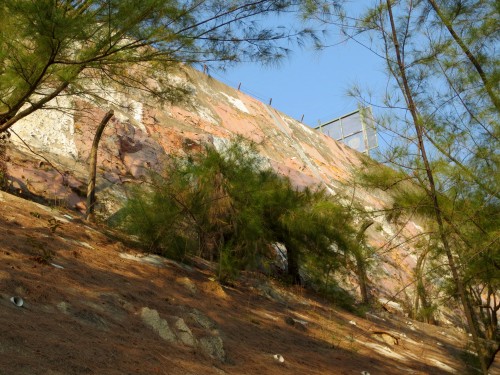 And a view from a distance.

This little mountain is really close to our apartment. (Much like Bruce Lee’s last house.) What is it, you ask?

It is among the last remnants of Hong Kong’s old airport (Kai Tak), which closed on July 6, 1998. Kai Tak started as a rural airstrip, then became more like a real airport during the Japanese occupation of WWII. As Hong Kong expanded really quickly in the post-war years, so too did the airport.

Here’s the thing about Kai Tak, though. It’s nestled between mountains on the water in what is a very built-up area of Kowloon. Here’s a map. The airport is the blank area just to the right of the words “Kowloon Bay.”

Kai Tak was famous for the flight path in. Let us begin with an instrument approach procedure chart. 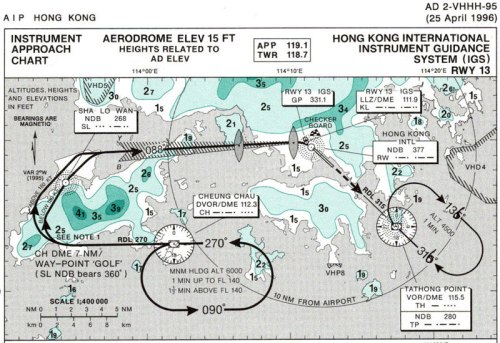 You can see the approach starts over on the left, over the very large Lantau Island (coincidentally, where the new Hong Kong airport is). Planes then proceed east. Now look at the little icon where that horizontal line stops. It is, as the chart clearly labels it, a checkerboard. Interesting.

At the checkerboard, pilots had to execute a totally bonkers maneuver. Here’s Wikipedia’s description:

Upon reaching a small hill marked with a huge “aviation orange” and white checkerboard, used as a visual reference point on the final approach (in addition to the middle marker on the Instrument Guidance System), the pilot needed to make a 47° visual right turn to line up with the runway and complete the final leg. The aircraft would be just two nautical miles (3.7km) from touchdown, at a height of less than 1,000 feet (300 m) when the turn was made. Typically the plane would enter the final right turn at a height of about 650 feet (200 m) and exit it at a height of 140 feet (43 m) to line up with the runway.

So that meant for some crazy skilled pilots. In fact, pilots had to be specially certified to land at Kai Tak. Here’s what the turn looked like in practice. 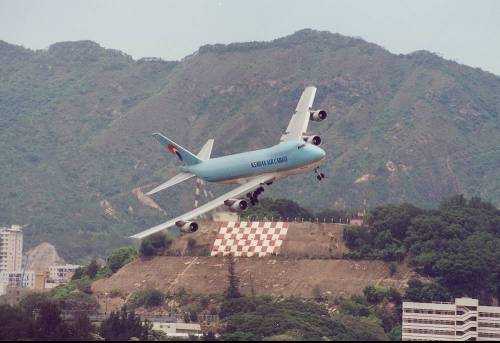 Now here’s the other crazy thing. Between the checkerboard and the runway is a very densely populated area of Kowloon called Kowloon City. After making the turn, planes descended very low over the city. To wit: 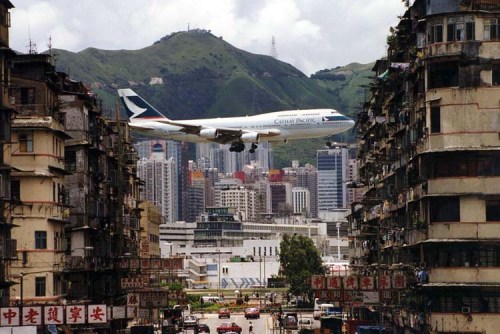 The turn had to be done visually—i.e., without the aid of instruments. In fact, they had to ignore their instrument guidance system upon reaching the turn. Check out this awesome chart. 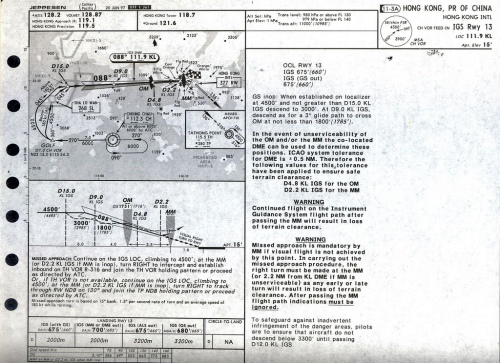 Let me draw your attention to a few details. First, the prominent checkboard icons. Second, the warning in the middle of the right-hand column:

Continued flight on the Instrument Guidance System flight path after passing the MM [Middle Marker] will result in loss of terrain clearance.

So that’s a nice way to put it. If you don’t ignore the guidance system, you’ll crash into a mountain.

This chart is also kind of cool because it says “Hong Kong, PR of China” on it, during the brief period that Kai Tak was open after the return of Hong Kong to China on July 1, 1997.

Here’s a photo I took from the checkerboard, looking towards the old airport. (The area is now under development, allegedly as a cruise ship terminal.) The runway is that piece of land jutting out into the water. 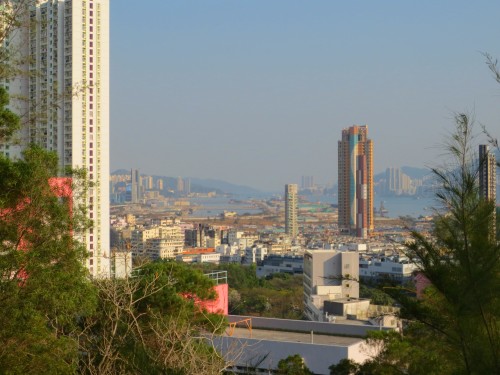 There are also lovely views of Victoria Harbor and HK Island, which isn’t very far away.

Here is an excellent little video that better explains and illustrates the checkerboard turn.

Would you like to see this landing done from inside a cockpit? Here’s a video. You can see the checkerboard quite clearly dead ahead around 2:55, with the sharp right turn shortly thereafter. Notice how little time there is after completing the turn for the pilots to ensure they’re lined up properly.

The landing at the new HK airport is a lot more boring. Which, frankly, I think I’m okay with.

Note to those who might have stumbled on this blog and want to know how to get to the checkerboard: The checkerboard is at the northern end of Kowloon Tsai park, behind the tennis club. We entered the park via the stairs at the junction of Hereford Road, Baptist University Road, and La Salle Road. Once you’re in the park, look up and left. Voilà! Back behind the tennis courts you will find a stairway up the mountainside. Unfortunately, it’s behind a locked gate.

Fortunately, that fence extends only about 15 feet to the left, and you can climb over the boulders to get to the stairs. (It’s not exactly high security.) It’s a little precipitous once you’re up the hill, but well worth it for the view. I encountered some people having a picnic, and they told me they descended from Lok Fu park, which is at the top of the mountain. That lacks the drama of the ascent, though. 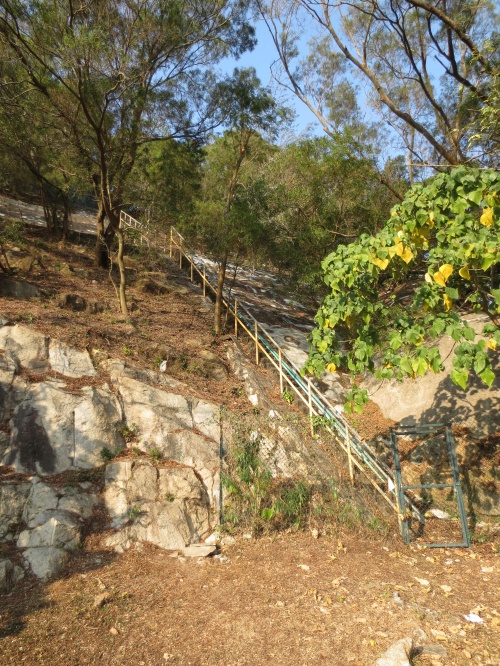