If you’re going to write about a trip to Shanghai, can you title it anything other than “Shanghaied!” (exclamation point required)? I mean, really. Not using that title would be as conspicuously resistant as using it is conspicuously obvious.

But anyway! We went to Shanghai last weekend and had a very fine time, despite temperatures hovering in the mid-30s. (That’s mid-30s Fahrenheit, mind you; we’ll expect mid-30s Celsius in Hong Kong in July.)

The first thing we noticed about Shanghai—and which we’d been warned about, but it was still alarming—was the thick brown haze hovering over the city. Here’s a view from the plane. 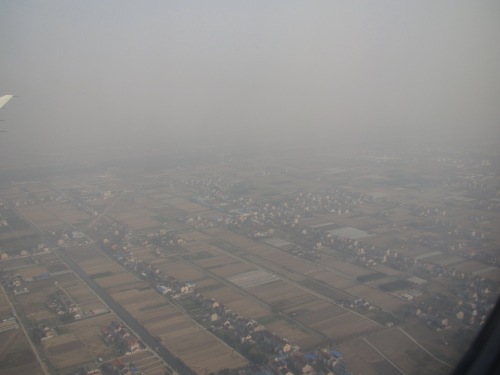 We learned later that we shouldn’t worry about it, since Shanghai is on the move to become eco-friendly, etc. (You may recall that we heard similar rhetoric at the Hengqin New Area.) 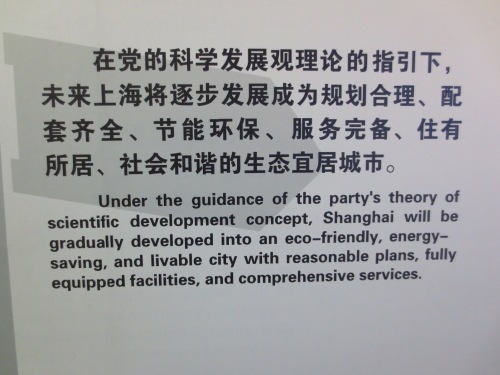 The pollution is bad enough that many of the people walking around with face masks on had what can only be described as “fashion” face masks. Rather than the surgical kind, these were made of colored, patterned fabric. I picture folks having a drawer full of them, perhaps next to their socks.

One of the fun, albeit touristy, things in Shanghai is the high-speed Maglev (magnetic levitation) train [official site]. This bad boy runs 18.6 miles in just over 7 minutes, reaching a top speed of 430 km/h. Here is proof:

It goes so fast that pretty much everything just outside the window is a blur. Fear not, I will post a video forthwith.

The kooky thing about it, though, is that the terminus (which is the only stop) leaves you well outside of downtown Shanghai, in the Pudong New Area. So from there you can either transfer to the Metro or, as we did, jump in a taxi to continue across the river. It’s kind of like if Chicago built a high-speed train that ran from O’Hare to Shaumburg.

Perhaps the most famous sight in Shanghai is the view across the river from the Bund towards Pudong. A friend of ours here in HK used to spend a lot of time in Shanghai in the mid- to late-1980s, and he said that he used to look out across the river at this very scene, and it was all farmland. It was in 1993 that China made this area a Special Economic Zone, with the idea of turning it into the financial capital of China. Here’s the view now.

Note the absence of farmland.

And a panoramic one by night (click for the larger view, of course).

The tall, dark building in the center is the Shanghai Tower, under construction.

The Bund itself, on the western side of the Huangpu River, is where the various international businesses, banks, and government offices were set up during Shanghai’s 19th-century expansion. The architecture, consequently, is very Western, even more strikingly so than the British-built stuff in Hong Kong.

Fans of The Amazing Race will recognize the tower in the foreground as the pit stop at the end of the first leg of Season 21.

We were the last to arrive. Fortunately, this was a non-elimination leg.

The pedestrian walkway along the Bund is quite lovely, and features some inspirational maxims.

I call dibs on “Forbidden Trample” as the name for my next heavy metal band.

Also, you can get some pretty good beer there (hard to come by in Hong Kong). 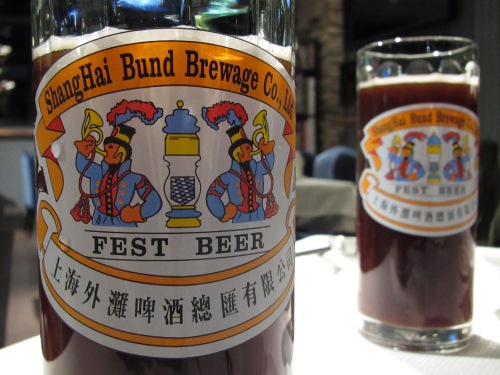 Are these guys playing horns or about to have beer poured down funnels? Must it be either/or?

Although Shanghai is an enormous city (the largest in China by population—22 million in the urban center), walking around is really the best way to get a sense of it. And we did a lot of walking. We particularly enjoyed Shanghai since we’ve been in Hong Kong for three months; if we had flown directly from Chicago to Shanghai, I think we wouldn’t have appreciated its look as much.

And what is that look? Oddly enough, although both Hong Kong and Shanghai developed at basically the same time time and under similar circumstances—via a sudden and rapid injection of European influence in the mid- to late-19th century—Shanghai looked to us a lot more like a Western city than Hong Kong does. That might be because we didn’t get far enough out of the city center, just as staying on Hong Kong Island (the most obviously British part of HK) would give you a different sense of the city than you’d have if you ventured into Kowloon. Still, I think that comparing Shanghai’s center with Hong Kong Island, Shanghai is more Western in appearance.

The fact that we’re in the weeks leading up to Christmas probably contributed. Here’s a gorgeous tree in the legendary Peace Hotel (now the—ugh—Fairmont Peace Hotel). 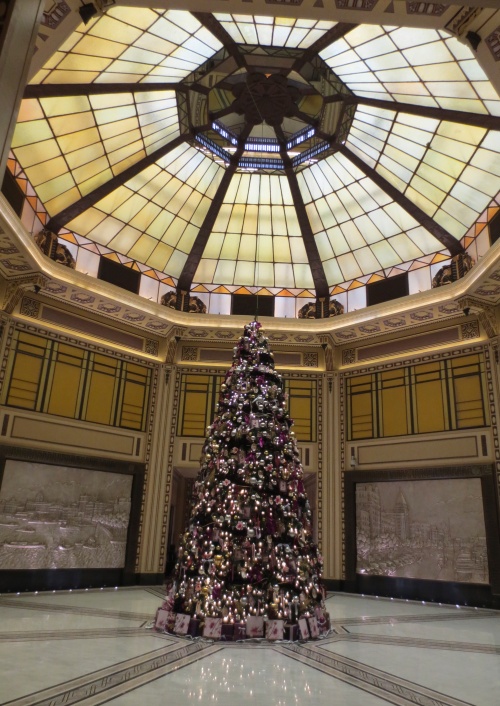 On the one hand you have broad, tree-lined avenues like this one in the (former, bien sûr) French Concession:

And Nanjing Road (one of the big shopping streets): 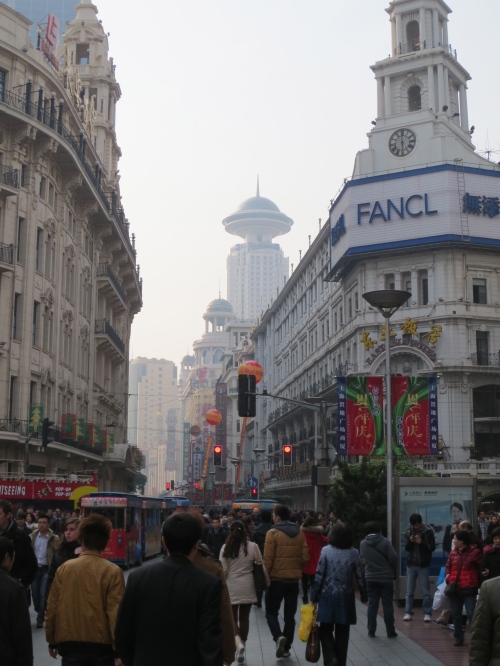 Apart from the crazy UFO-topped Radisson hotel in the background, this could just as well be Paris or Washington, D.C., no?

But then you have these awesome alleys:

And while there’s crazy amounts of automotive traffic:

There’s also a lot of this:

The cultural mix reached its apotheosis when we encountered, quite by accident, this Christkindlmarkt. There’s nothing quite like encountering Glühwein and pizza in the same place, all served up by festive Shanghainese.

And on the other hand, there’s this. None of the Chinese characters on this sign is among the fifty I know, but I’m guessing from context—keep in mind that this was along a street full of food stalls—that snake is served here.

Snakes on a plate. 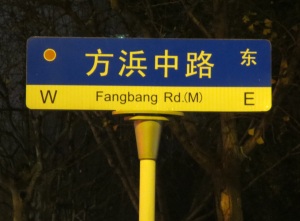 A section of this is “Old Shanghai Street.”

We encountered this snake sign during a long, meandering walk back towards our hotel. We didn’t have a set route, instead just heading in the general direction we needed to go and turning down whichever streets looked interesting.

At one point we found ourselves on a dark, mostly empty, street that was lined with huge motorcoaches. As we walked along, we started to see more and more people moving in large herds, each one led by a tour guide (unmistakable for walking backwards while carrying a little flag on a pole).

And then there were lots of groups, and lots of people, and lots of lights. We had stumbled, without meaning to, onto what the tourist maps called “Old Shanghai Street.”

I’m glad we didn’t make a point of seeking this out, as we would have been seriously disappointed. But boy was it strange—it was like someone’s parody of a parody of Epcot Center’s vision of “traditional” China, as envisioned by Hollywood.

Students of Baudrillardian simulacra, my photos can be licensed for a very reasonable fee.

You can also enjoy traditional Chinese foods, like KFC. 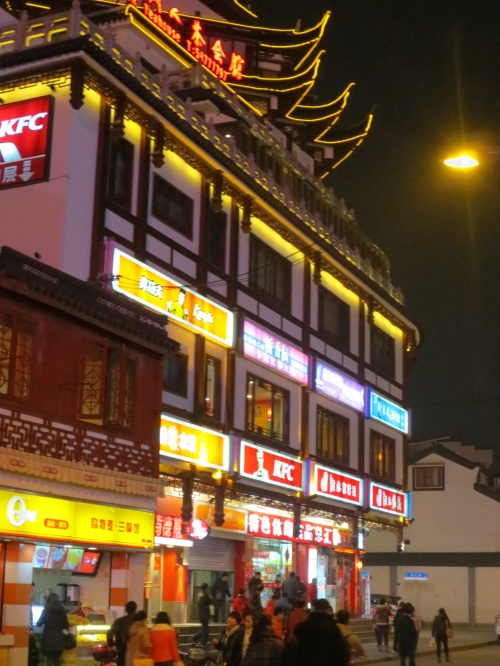 Welcome to the desert of the hyper-real.

The street was swarming with Chinese tour groups, too, which made it especially bizarre. It was the least “authentic” thing imaginable, and all the more perverse because less than five minutes away there were all sorts of fascinating things to behold.

This was all a stark contrast to the elegant and refined look of People’s Park and People’s Square.

I just can’t get enough of the goofy-but-awesome tilt-shift setting on my camera that makes a scene look like a model.

Ironically, this next photo was taken at the Shanghai Urban Planning Exhibition Centre, which features an actual model of an idealized future Shanghai.

But perhaps the most unexpected, and unexpectedly awesome, thing that happened occurred while we were eating lunch in the French Concession at an ayurvedic vegetarian restaurant housed in a lovely old yellow house. While pondering our food, there was commotion outside the window: a bride and groom arriving to have wedding photos taken outside the restaurant. Why there? We do not know. But we sure as hell took some photos of them through the window.

Keep in mind that it was freezing out.

When we left the restaurant we examined the house and environs more closely to see if there was something especially significant about this place, but couldn’t find anything. Maybe it was the vibrant yellow walls?